Showing posts from September, 2016
Show All

- September 11, 2016
If you use GIT as your source control system and if you use maven, the jgit-flow plugin is a massive time-saver, especially when we release a slightly large application with multiple modules (Each with it's own pom file).

Two steps:  mvn clean external.atlassian.jgitflow:jgitflow-maven-plug in:release-start and  mvn clean external.atlassian.jgitflow:jgitflow-maven-plug in:release-start
do the job.
The above sequence basically updates the pom file versions to a release version (e.g. from 1.0-SNAPSHOT to 1.0, merges the development branch changes to the master branch, and sets the pom versions in the development branch to the next snapshot 1.1-SNAPSHOT)
If you have an application with multiple projects/modules, all of them can be released in one go (such as my application here that contains two modules)
Of course, there are some peculiarities when SOA Composite projects are involved.  e.g. the oracle-soa-plugin maven plugin insists on 'deploying' the composite and running tests at …
Post a comment
Read more 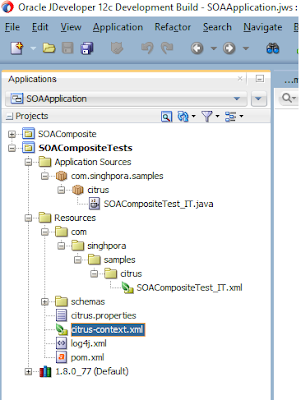 Reading parts of Test-Driven Development for Embedded C" by James W. Grenning inspired me to take another look at this area and look for something new,  fresh and powerful for use in the SOA world.

I don't think we need much convincing on the importance of  automated test coverage (if someone does, please read the first chapter of the book mentioned above, especially the section on "Physics of TDD" that tries to quantify the high long-term costs of "Debug later programming" - the nemesis of TDD)

A very simple application with a SOA composite project and Tests project can be found here: https://github.com/jvsingh/SOATestingWithCitrus

Although the test in this is just a simple SOAP request, what I am interested in are the features that citrus has to offer that can help create a solid battery of tests.

Tests can be specified in Java or XML or a combination of bothA number of test utilities are inbuilt - including things like database access, JMS,mock SOAP endpo…
Post a comment
Read more
More posts