Geographical clusters with the biggest concentration of web services

- October 17, 2017
From a data set of approximately 145 million IP addresses running at least one publicly accessible web service (such as a website), I was able to determine these 20 geographic "clusters". 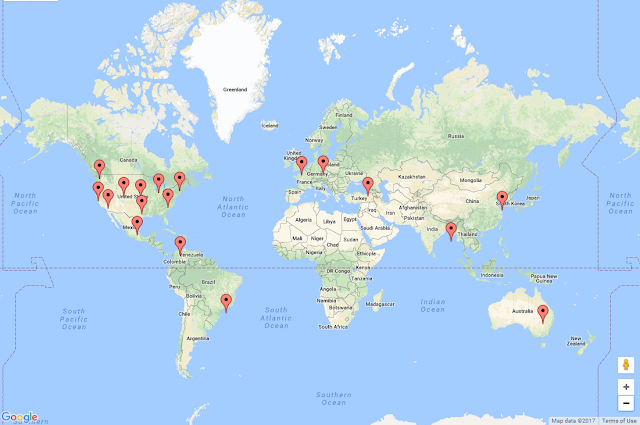 Note that these are not "18 locations with the most number of web services" but data set clustered into 18 geo locations - similar to centres of gravity. (Which is why some of the clusters appear in the sea but that just happens to be a location central to other clusters close by - such as Southern India and South-East Asia ). It is not surprising that many of these correspond to major technology hubs in the United States - including the Silicon valley areas of California and Seattle. (I did a UK-only analysis and the data clustered around London, a location between Oxford and Cambridge, and a location between Glasgow and Edinburgh - I'm guessing somewhere around Linlithgow). It is a sheer coincidence that these clusters should correspond to specific well known locations - the prevalence of a large number of web hosts at these locations happens to skew the clusters close to these locations.

It is possible for nearly any Internet connected device to run a service accessible over the Internet, as long as it has a public IP address. (All my discussion and analysis below assumes IPv4)

A "service" in this context could any data or functionality exposed to "clients" using protocols running on TCP/IP - in other words, something that can be reached using an IP address and a TCP port. To actually talk to the service, you need to know its protocol - http is a widespread example.

Historically, the way IP addresses have been allocated has been in chunks of "networks" assigned to companies or ISP's rather than using some mathematical scheme. Each IP address has some metadata associated with it. Because companies and ISP's that get addresses allocated to them are physically located in some part of the world, the IP addresses allocated to them also therefore get a de-facto geo-location "allocated" to them. (It is possible that large ISP's divide their IP address into smaller sub-nets with different geo-locations assigned to groups of IP addresses).

To find out yours, you can search  "My IP address" and find out the geo location information about yours from ip2location.com or even by searching "My Location" on Google. 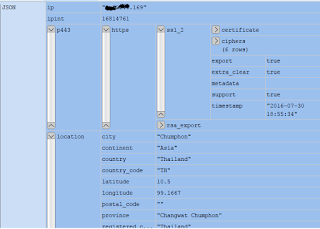 Machine learning is heavily based on statistical analysis and probability techniques and clustering is one of them. With the large computing power ("cloud scale" distributed computing) and large data sets available to us today, we are able to perform some very interesting analyses. The raw data I used is in JSon format, acquired from scans.io and stored on an S3 bucket. To process the data, I used a cluster of Spark nodes. The code to process the data is python with an existing machine learning library to cluster the data and executed with pyspark.
The crux of this experiment was that 145 million potential geo-location pairs were reduced to  or clustered into a group of 20 - a set we can make practical use of (even if that is in writing a blog post)

Popular posts from this blog 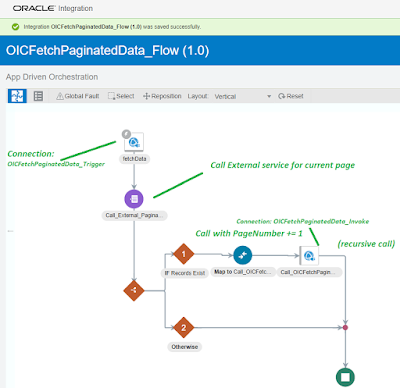 A number of use-cases can be implemented cleanly using a recursive approach. This post is not to debate the pros and cons of recursion versus looping but provides a simple approach to achieve this. For scenarios such as the ones listed below, and possibly more, this approach is quite efficient, concise, maintainable, and most importantly, it is highly scalable. It also leaves a smaller runtime footprint with a smaller execution time per instance than a looping flow instance. This also makes error handling easier as I will describe later.
Polling (continuously monitoring an FTP location, a database, or an API output)Paginated API's (when the target system exposes an API with a paginated* interface such as the eBay findProducts operation)Retryable flows
Read more

How to show/hide operators in adf:query advanced mode

In this post, I will provide a way to modify the operators list in the ADF query panel (af:query component) - i.e. to remove and add operators to the list.
(at the time of writing this post I didn't realise it was already documented here: http://docs.oracle.com/cd/E14571_01/web.1111/b31974/web_search_bc.htm#ADFFD2457)


The ADF Faces af:query component is a handy tool that neatly binds to an ADF bc View criteria defined in the model.


In the default advanced mode, the query panel allows end users to select a suitable operator to apply to the query fields. The default list of these operators (of type JboCompOper) is populated based on the field's data type and ADF is rather intelligent with this feature - for example:
a) for an LOV based field, it displays an LOV if you select the Equals operator but changes to a text field when you choose the Starts-with operator...
b) It shows you two fields if you select the between operator. 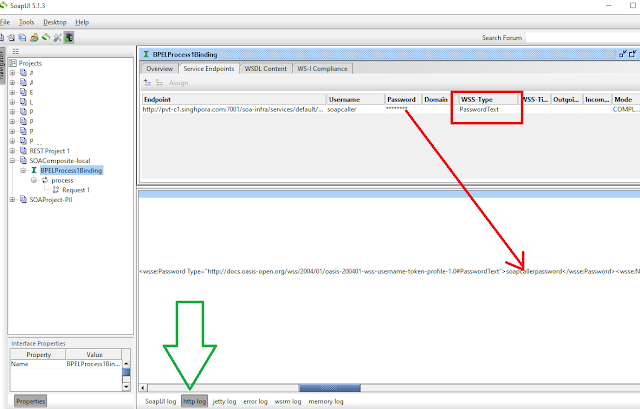 Objective: To have a basic level of authentication on web services (especially where there's no transport layer security) without having to pass clear text passwords in the WS Security headers.
Background: The concepts are fairly generic but this post is highly Oracle Fusion middleware/SOA Suite specific. There can be complex decision tree (see [1]) involved when selecting the 'appropriate' level of security for any system. As security involves trade-offs between cost, performance, usability and other variables, the 'appropriate' level of security could be highly specific to the environment, usecase, system and people. But as developers, we can still perform some due diligence based on the tools and knowledge available to us.
My rule of thumb when developing a traditional web service or microservice is: If it's reading from a secure database or some system that is accessible only via authentication, it must only expose a secure endpoint.
Now sites can differ con…
Read more